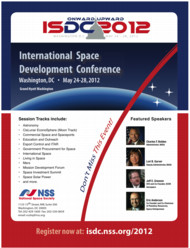 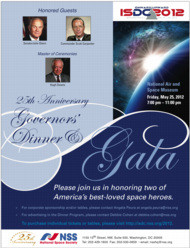 The International Space Development Conference (ISDC) covers several broad areas of study related to building a spacefaring civilization. Area such as: transportation to and through space, technology needed to live and work in space, and Earth-based activities to advocate for or educate others about space development. For 2012, ISDC is returning to Washington, D.C. The conference will be held from May 24 - 28, 2012 at the Grand Hyatt Washington.

NSS and the ISDC 2012 Committee would like to expressed our sincere thanks to our attendees, speakers, exhibitors, sponsors and volunteers/staff for making ISDC 2012 a great success. We hoped you enjoyed the conference, and we invite you to ISDC 2013 in San Diego, California in May 2013.

Meals sales have been extended past the May 20 deadline for a limited time only.  All meals are currently available for purchase, including the Gala, but act fast because we may have to close them at any time.


It Is Almost Here!

We are putting the final touches on this awesome conference.  We should have a detailed daily schedule available online around next Wednesday night.  Details on when you can pick up your pre-registration packages will be annouced next week and will be posted at the hotel.  If you have not purchased meals or selected your prepaid meals, you must do so by midnight Eastern, the night of Sunday, May 20.  There will be NO meal sales during the conference.  On behalf of NSS and ISDC 2012 Staff, we will see you next Thursday!  Have a safe travel!

We are pleased to announce that the following individuals have been confirmed as featured meal speakers for ISDC 2012:

Rick Tumlinson (Bio), Founder, The EarthLight Institute, as the Keynote Luncheon Speaker on Sunday, May 27th.

For more information on these noted individuals, as well as all of our other featured speakers and VIPs, please visit the Speakers and VIPs page. If you haven't yet registered for ISDC 2012, please visit register today. Registration rates go up on May 21 and the last day to register for these and all other ISDC meals is May 20.

Watch the Colbert Report on Comedy Central May 3, 2012

On Thursday, May 3, Buzz Aldrin, Apollo 11 Astronaut and Member of the NSS Board of Governors, will present a 2012 Space Pioneer Award for Mass Media to Stephen Colbert on The Colbert Report on the Comedy Central cable network.

Colbert is receiving the award in recognition for his unceasing promotion of "space tourism, space development, NASA programs, and the use of private enterprise for better access to space", all of which are supported by NSS. He frequently interviews astronauts, space entrepreneurs and scientists, demonstrating that it is possible to inform the public on serious space topics in a comedic setting.

Colbert is probably best known in the space community for his campaign to name a new space station node that actually resulted in the naming of a space station treadmill after him. The Combined Operational Load Bearing External Resistance Treadmill, or C.O.L.B.E.R.T. for short, is located in the Tranquility node of the ISS, the node that was the subject of the naming competition. Colbert received the most votes; however NASA decided to name the node after the Sea of Tranquility, site of the Apollo 11 moon landing.

If you have any problem viewing the video clip, plese visit The Colbert Report website for other options.

We are pleased to announce that Eric Anderson, the Co-Founder and Co-Chairman of newly-announced Planetary Resources, will be the keynote speaker for the opening luncheon at ISDC 2012 on Friday, May 25. Anderson is expected to address conference attendees on his new company's plans for asteroid mining. "Planetary Resources is perfectly aligned with the second half of the NSS's vision, that of 'the utilization of space resources for the dramatic betterment of humanity,'" said Paul E. Damphousse, NSS's Executive Director, "We look forward to hearing more specifics on the company's strategies for harvesting planetary materials for use here on Earth."

Greason Announced as Keynote Speaker for Saturday Dinner at ISDC 2012

ISDC 2012 Planning Committee is pleased to announce Jeff E. Greason, President and Co-Founder of XCOR Aerospace, as the Keynote Speaker at the Saturday Dinner on May 26th. The dinner will be held in the Independence Ballroom of the Grand Hyatt Washington Hotel at 7 pm.

"Jeff's well-received and thought-provoking speech at ISDC 2011 - A Settlement Strategy for NASA - has become widely regarded as a major statement in the field of space policy and we very much look forward to hearing what Jeff has to tell us this year," said Paul Damphousse, NSS Executive Director. See a video of Greason's 2011 speech recorded by MoonandBack Media. Read more here.

Important Message to Attendees Under 18 Years of Age

All persons under the age of 18 desiring to attend ISDC must have their parent/guardian complete the Waiver of Liability and Medical Authorization for Students (download the form here) and the Student Medical Information (download the form here). Students who do not have this information on file with National Space Society headquarters by May 15, 2012, will NOT be given their registration badges and will NOT be permitted to participate in the Conference in any way. If there is any possibility you will attend ISDC, even if you do not have your Visa yet, we strongly recommend that you have these forms completed and send them â before May 15, 2012 â by email or fax to: National Space Society, [email protected] or 202-530-0659. You should also bring a copy of the forms with you to be presented at the Registration Desk, just in case there is any problem.

NSS is pleased to announce Dr. Stephen Hawking as the 14th recipient of NSS's Robert A. Heinlein Memorial Award. The award was presented to Dr. Hawking at a special ceremony at the Cooks Branch Conservancy in Montgomery, Texas on March 28 and was given in recognition of his outstanding and continuing public efforts in support of human space development and settlement. The date on which Dr. Hawking will receive the award exactly coincides with the 25th Anniversary of the founding of the NSS through a merger between the National Space Institute and the L5 Society. A video of the award presentation to Dr. Hawking will be shown at the 25th Anniversary Governors Dinner and Gala.

We are very pleased and honored to announce that Senator John Glenn and Commander Scott Carpenter, both of whom are celebrating the 50th anniversaries of their respective orbital flights in 1962, will be our honored guests at the 25th Anniversary Governors' Dinner and Gala, being held at this year's ISDC.

Senator Glenn and Commander Carpenter each will be presented with the NSS' prestigious Space Pioneer Award in the category of Historic Space Achievement during the evening's program. The Gala will take place at the National Air and Space Museum on the National Mall on Friday, May 25th. Please note that tickets will go on sale approximately April 10. We will post further information on the ISDC 2012 Gala Page as they become available.